Be our patron for as little as one dollar a month:

10. The Most Deceitful Thing

A Face in the Clouds

So, what is it? Is it a butterfly? Perhaps some big scary monster? Or the landlord's aura when the rent is due and the funds depleted? Someone from the Delta Quadrant ordering a pizza in sign language? The sole remnant of a rare and silent wrong...?

Well, it's none of the above, or rather, all of the above. This picture is a crude imitation of a Rorschach Ink Test, an abstract blot of ink lobbed on paper to reveal what occupies an observer's mind.

Huckleberry from Police Academy would probably have seen his gun in this image. Rock Hound from Armageddon would have reported seeing a woman with large breasts. Anybody else would have their minds seek their memory and associate the abstraction to feelings of anxiety and fear, or endearment and amusement, or whatever the person's general undertone would be.

Paul Simon sang it in The Boxer, "...still a man hears what he wants to hear and disregards the rest, oo lalalala lalalala..."

And what about this one? What is it? The Yeti finally captured? Sunrise over Sinai? A trendy painting by a famous artist, entitled composition in shades? 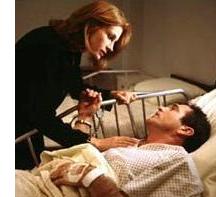 Nope. None of the above. It's Julia Roberts' voluptuous kisser. Look at the whole picture to the left, a frame from the movie Conspiracy Theory.

Well, no again. The picture to the left is a bouquet of pixels, just like the smudgy detail to the right. The pictures to the left and the right are really the same. The right one is contained by the left one. There's no difference. Then why do we all mistake the left picture for Julia Roberts?

Imagine for instance what it would be like to be a dog or a cat. In that situation we would compose our image of reality largely by smells. The picture to the left doesn't smell like Julia at all (provided we know what she smells like, but probably not like a computer screen) and if only we base our perception on smell we would certainly not mistake the picture for Julia.

Mankind's amazing ability to see patterns is often as helpful as it is confusing. Man's primary sense is vision and when our eyes tell us that there's a pattern our other senses are often discarded. Hence we make ourselves believe that we see Julia Roberts where she's not, or recognizable features in a foggy stain. Recognizing patterns allows us to process large quantities of information at once. It allows us to plot our position in the world around us, to enjoy music, art, fellow humans since all behavior and all objects are in fact patterns caused by huge amounts of little particles or impulses.

Patterns are good. Patterns are our friend. Except when you see a pattern that no one else sees. In that case you are either brilliant and apt for volleys of wrongful derision or completely nuts like Mel Gibson in Conspiracy Theory and in for a sea of trouble against which no arms can be raised. Anyway, history as well as literature suggest that the seers of the unconfirmed are often also speakers of the unconfirmed, usually lonesome souls blabbering on about the end of the world, howling at the moon, or hugging curls of caustic fires set to end their diatribes. If you don't fit in to that good old pattern called proper human behavior there's always some xenophobic volunteer to light the stake.

But the question is: when is a pattern really there and when do we only think it is? A face in the clouds isn't really there. Deriving our reality model from that face in the clouds will throw our world in disarray as soon as the cloud dissipates. And sure, old Mel was right in the movie but many conspiracy theories are houses of cards; mountains of data woven together upon imaginary spines. It's not a valid argument to believe that a pattern is there. Everybody who sees a pattern somewhere is convinced that the pattern is really there, and all additional observations are interpreted in such a way as to confirm that belief.

A pattern in the clouds is always something we know and we see it in the clouds because we project that which we know upon that which we observe. Even when no one else sees that pattern. And the fact that everybody sees a certain pattern is also not a valid argument for the pattern's factuality. There was a time that all observations about the earth confirmed the consensual belief that the earth was flat. And that turned out to be a face in the clouds as well.

Our beliefs are not valid instruments to analyze either reality in general or any specific pattern.

Well, think of Mel's conspiracy theory. Some of it turned out to be right but most of it was projecting a paranoid mind upon unrelated events. And there's the key word: unrelated.

These kinds of patterns are so-called "projected patterns".

It is often suggested that Truth is one of those projected patterns, and that it differs per observer. But when we partly define Truth as that which (at least) covers all nature, it should also contain our various perspectives since they are part of nature. Truth must exist before observation because it must also contain a human who doesn't observe, or even the time when there were no humans around to do any observing. Truth cannot be a projected pattern and must therefore be a not-projected pattern.

Truth is a pattern that is confirmed by all elements that make it up or are covered by it.

Sentient beings like ourselves walk through this world projecting themselves upon their surroundings. Hence we see faces in clouds, women in pictures and conspiracies in unrelated events. Humans differ from animals not in their greater ability to notice patterns, but by being able to be critical about their perceptions and discard their own perspective. That leads to communion with Truth.

Truth can only be noticed when the private perspective is doubted.

Let's look at something pretty. Go to the next chapter:
The Mandelbrot Set →

Be our patron for as little as one dollar a month: